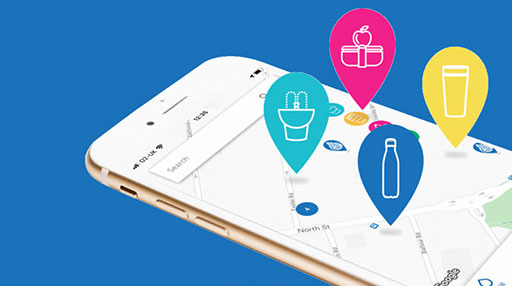 City to Sea’s Refill app is the world’s first dedicated app to connect people to places they
can refill and reuse, avoiding single-use plastic and accessing safe, clean drinking water. To
date, the free, location-based app has been downloaded more than 350,000 times and has
now been translated in 9 different languages (English, German, Spanish, French, Italian,
Portuguese, Welsh, Japanese and Arabic) and operates in countries around the world.
Today, the award-winning campaign is launching in Switzerland joining countries like
the UK, United Arab Emirates (UAE), Ecuador, Italy and Japan. To date the campaign has
saved over 100 million pieces of plastic since it was launched.

Jo Morley, City to Sea’s Head of Campaigns and project lead for Refill, said: "Our addiction
to single-use plastic is out of control and it’s having a catastrophic impact on our planet. This
World Refill Day, we’re calling on governments, brands and big businesses to put words into
action and prioritize reduction and reuse over recycling which we know isn’t working. We’re
simply exporting our waste problem around the world and making plastic pollution worse."

"As a global movement, we have the power to create a wave of change and as individuals,
our small changes really do add up. From Basel, to Bristol, the refill revolution has now gone
global and with more than 200,000 Refill Stations listed around the world – covering
everything from high-street chains and supermarkets to independent cafes and zero-waste
shops the Refill app puts the power to go plastic-free at our fingertips."

In Europe alone there are close to 160,000 refill stations already listed on the Refill app –
including cafes, zero-waste shops, plastic-free retailers, water-fountains and brands with refill and reuse options. Today, European eco cleaning brand, Ecover announced a new partnership with City to Sea, adding 700 locations where consumers can access refills for cleaning products in the UK alone.

Tom Domen, Ecover Global Innovation Lead commented “At Ecover we believe re-use is the
new recycling. It's redefining the ambition for a true circular economy. We have set
ourselves the challenge to make re-use the new standard for everyday shopping behavior.
As we develop and implement new solutions to make re-use more accessible, we also need
a strong community to drive the change in behavior. Which is why we’re delighted to work with City to Sea, who have an impressive track record in community campaigning, in a year-
long partnership to drive refill behavior and help grow the refill movement”.

Italy is the third largest consumer of plastic bottled-water in the world and the largest
consumer inside the European Union. Since launching in 2020, during the pandemic,
the Refill Campaign in Italy has already mapped over 45,000 locations, helping Italians avoid
single-use plastic – in particular bottled water. The campaign lead in Italy, Margherita Cavalleri, commented saying, “1 million bottles sold every minute is far too much. World Refill Day is our chance to raise awareness in Italy and to join an international campaign.”